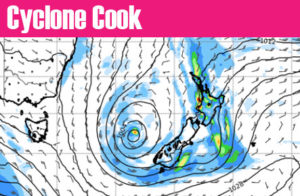 On Wednesday 12th of April the country was battening down the hatches and preparing for Cyclone Cook.  The emtel hotline phone starts flashing, its Whakatane, and they need help.  Emtel mobilised their staff from Hamilton and Wellington to attend and assist the Whakatane EOC Intel GIS team who were already in one crisis, the Edgecumbe Flooding event, and now about to be thrusted into a Cyclone.

Ethan Hohneck arrived first and jumped straight into a day night shift in the EOC.  Working furiously through an ever-growing supply of data coming in.  Data like road closures, slips, power cuts, people stranded, the list went on.  Staff demanding to see the EOC maps updated as quickly.  The pace, simply chaos.  The goal, work hard and provide a service.

Whakatane District Council had also managed to acquire the assistance of some of the other Bay of Plenty council’s GIS staff.  So with a varying mix of skills the team of misfit technologists set about providing map after map, analysis after analysis, and all while Cyclone Cook got closer.  Some working on the Edgecumbe event, others preparing for the Cyclone event.

Martin Roundill arrived hours before Cook.  The all morning drive from Wellington ensured he arrived without any flight delays if he chose to fly up.  Straight into a shift with a new set of GIS staff from all corners of the Bay.

Cyclone Cook eventually was downgraded and labelled a “Non-event”, however there was still work to be done.

Emtel staff stayed on for 6 days, 6 long shifts each, a mountain of work.  Well done team for jumping right into action when needed.